What do cloth-covered wire manufacturers see when they are sightseeing?  Let me tell you….

On a whim, Jim and I went to Concord, Massachusetts, this weekend, about ninety miles from our home in Northampton. While Concord is best known for being, along with Lexington, MA, the location of “the shot heard around the world“, the beginning of the fighting in the American Revolutionary War, it was also home to several of America’s shining literary lights of the nineteenth century, including Ralph Waldo Emerson, who coined that famous phrase, as well as being the founder of the Transcendentalist Movement.   Just west of Boston, the road between Boston and Concord is the location of Paul Revere’s famous ride.

Jim and I visited the Minute Man National Park, a large national park covering much of the road along which that first battle of the Revolution took place.  Also part of the park is a house called Wayside: Home of Authors.  This is a house where several famous American authors lived, the Alcotts, including Louisa May, author of Little Women and its sequels, Nathaniel Hawthorne, author, most famously, of The Scarlet Letter and The House of the Seven Gables, and Margaret Sydney (real name Harriett Lothrop), author of the children’s book series, The Five Little Peppers and How They Grew.

Jim and I are both big readers, and Jim is a writer as well, so the tour of Wayside was very interesting from the literary standpoint.  But what was it that kept catching my eye in every room?  The lighting, of course, and its wiring.

In the gift shop/house introduction area where we signed up for the tour was this installation of knob and tube wiring.  Risking seeming completely crazy to the National Park Service staff, I asked for permission to photograph it.

In the high turret Nathaniel Hawthorne added to the house during his tenure there, were two of these lamps:

As far as I could tell, there was no second light under all the crystal.  And it looked like the bulb would have had a shade over it originally; but it is a configuration, with the crystal beside the light source, that I have never seen before.  It looks like it would be glorious when lit up, somewhat out of character for the Victorian era in which it seems it was created. 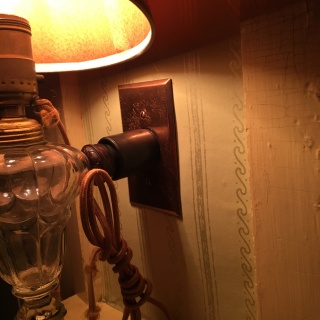 The kitchen was a veritable gold mine of lighting for the cloth-covered wire enthusiast.  What all the other visitors passed by without so much as a glance was this wall of lighting and wire.  No explanation for why there are three lights on this one wall, along with the bell connected to the bell pulls in the other rooms.

The oddest thing on the wall is this column of two sockets with an on/off switch.  The bottom socket has been converted into two outlets, complete with very beautiful cloth-covered wire.

OK, so we don’t only look at the interesting wiring in antique houses.  I also found this intriguing:

We hope that all of you have opportunities to enjoy our history all over the country.  And we hope you notice the wiring!

One thought on “A Transcendental Road Trip ”